A Psalter to be prayed 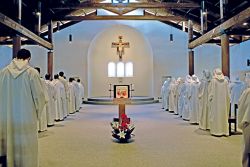 ...the prayer of the Christian, Christian prayer...

This Psalter has one precise object: the prayer of the Christian, Christian prayer. The book of Psalms, which in Hebrew is called “Praises”, contains of course the traditional prayers of the people o Israel and precisely for this reason is the book of the Old Testament most often quoted in the New, to show how Jesus the Messias has assumed, renewed, and fulfilled what the Psalms announced.

For this reason and thanks to the gift of the Holy Spirit, who opens their minds to understand the Scriptures, Christians have always sought and found in the Psalter the announcement and fulfillment of the mysteries of Christ; they have listened in it to his voice and his prayer and have taken from it expressions and the language of their own prayer to the God of Abraham, of Isaac, and of Jacob, the God and Father of their Lord Jesus Christ.

This Psalter, hence, has been conceived to be prayed with the New Testament and in the great tradition of the Church. Especially in liturgical prayer in choir and in personal lectio divina this Psalter, which directly and easily allows the Christian to find the unity of the two Testaments, favors the Christian prayer of the Psalms and aids the growth of the Word in the believer’s heart, in obedience to the fundamental principle: Scriptura sui ipsius interpres, Scripture is its own interpreter.