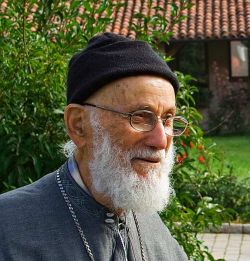 Eghion, 23 February 2008
A true kalògheros, that is to say –according to the Orthodox tradition– a man who became handsome because of his love

“I thank you, my God, because you gave me a dawn after every sunset” (O. Elytis)

On Saturday 23 February 2008 in the morning the funeral service of metropolitan bishop Emilianos of Silyvria took place in the “Faneromenis” cathedral of Eghion, Greece. It was a true spiritual event that has been attended by a small fraternal delegation of our community.

The corpse of metropolitan Emilianos was dressed in the bishop’s liturgical vestments, carrying the evangeliary on his chest and the miner’s lamp in his hand: the lamp was given him by the Belgian miners whom bishop Emilianos lived with during his pastoral ministry in Belgium (1952-1959); those miners, belonging to different Christian denominations, were the first people who lightened in him the fire of the ecumenical fervour. The coffin was placed in the middle of the church transept, under the great dome, on an elevated platform, which enabled people to see him, to come closed to him, to touch and kiss him, to bow or to kneel in front of him, to weep in his memory. One could easily guess that the people attending the funeral were all persons whom the metropolitan knew personally through his ability to meet people in depth, to address to them a word of his wisdom, and to share with them deep insights into life. There were mothers with their children, young and elderly people, poor people and men with gnarled hands… They were all his “friends,” people whom the bishop once met and loved, and who now came to meet him and express their love for him. The face of bishop Emilianos showed a deeply human and transfigured beauty. His peaceful face with a light smile was like that of a true kalògheros, that is to say –according to the Orthodox tradition– a man who became handsome because of his love.

During the solemn but sober liturgy, the present metropolitans addressed some parting words full of meaning. “Bishop Emilianos was for all of us a model of Christian life; he helped us to understand that the Church should not withdraw into itself,” said metropolitan Amvrosios. “I witness to his passion for preaching the Gospel in today’s world, to his closeness to the actual stories of the people, to the purity and strength of his relationship with Christ,” said metropolitan Kallinikos. Metropolitan Amvrosios, after having introduced the bishops to the assembly of faithful, stressed the presence of the community of Bose, with words of gratitude and fraternal friendship.

Besides the bishops, the priests of the diocese of Eghion and several monks were present: among them Father Ephrem, the igumen of “Prophet Elijah” Monastery in Preveza; Father Dionysios, igumen of Petras Monastery in Karditsa; Mother Diodora and Mother Emiliani of Karditsa; the nuns of Thebe… They represented the different monastic communities in which metropolitan Emilianos spent some time, taught, celebrated, and confessed, always sustaining and encouraging people. Finally there was a great crowd of lay people, and among them the staff of the “Aghios Karalampos” Centre, who lovely took care of bishop Emilianos until his last hour.
At the end of the service, the coffin with the corpse of metropolitan Emilianos, accompanied by many people walking in procession, was carried to the cemetery for the burial. There the tropary of the resurrection was sung: under the palms, the citrus, and the olive trees the triumphant shout “Christos anesti!” rang out. Before the burial of the corpse into the ground the relatives were called to take their farewell of metropolitan Emilianos. Our community took last the farewell of him too. A small gospel book was put in the metropolitan’s hands and his bishop’s mitre was replaced with the monastic hat: actually Emilianos always desired to be simply a monk. Then oil and wine were poured on a clod that the bishops placed on the corpse, saying that Emilianos was from that moment on one with the entire creation and the creation was in communion with him, as a promise of the cosmic salvation for all.

When the liturgical service was over, we gathered together for a coffee, and it was possible to exchange greetings, to share feelings, to establish new friendly relations… During the dinner many simple people came close to us conveying their love for Bose, a strong affection for our community that Mgr Emilianos felt and handed on to them. The doctor who took care of him said to us: “I realized how he loved you when last December expressed to me his strong resolution to leave for his farewell trip to Bose, against my advice.” And soon before going into a coma, Mgr Emilianos whispered to the nurse Eleni: “In Bose there are very good and kind Christians…”

The death of metropolitan Emilianos entrusts the friendship between the Orthodox community of Eghion and the community of Bose to us. This friendship is handed on to us as an actual reality and as a parable, as a little bridge between East and West built on personal relations and gestures of mutual respect for each one’s gifts. Mgr Emilianos often remembered the words of the beloved patriarch Athenagoras: “Maybe we forgot one thing: the humanity of Christ,” and these words are now left to us. This is a great gift and a great responsibility for our community: to build communion on the basis of friendship, as a way of life today and a seed, a prophecy, and a token for the future life.
Thank you, Father Emilianos, for this ineffable gift! We rely on your prayer and intercession for all… “My God, you called me, how can I leave?” (O. Elytis).