Sr Minke has entered the peace and light of God 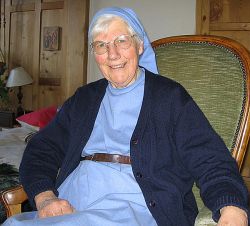 sr. Minke (De Vries)
On Saturday, 19 October 2013, sr Minke de Vries, of the Community of Grandchamp, a good friend of br Enzo and of our community from 1967 yet

On Saturday, 19 October 2013, sr Minke de Vries, of the Community of Grandchamp, a good friend of br Enzo and of our community from 1967 yet, accompanied by God’s infinite goodness, entered into peace and light at the age of eighty-four, on the Sabbath, which opens on the day of Resurrection, as her sisters write in their announcement, in profound gratitude for the gist of her life. Br Enzo and br Guido participated in the resurrection liturgy in the Arche chapel at Grandchamp on 23 October.

Sr Minke was born in Holland on 16 June 1929. Member of the Reformed Church, she passed her childhood and youth in the Netherlands, studying classics and church history, then in 1958 entered the Grandchamp community, where she felt she could express her call to God and to the world. After her profession she was sent to Lebanon, where she lived deep experiences of reconciliation. Upon her return to Grandchamp in 1964 she was mistress of novices and assistant to the sister in charge. She was elected prioress of the community in 1970, reelected various times, spending thirty years in all in that position. At the age of seventy she left this responsibility to dedicate herself with greater freedom to conducting retreats with Evangelical and Catholic communities and to participating in European and world ecumenical encounters.

At the invitation of John Paul II she participated at the Synod of Bishops on religious life and wrote the texts for the Way of the Cross at the Coliseum in 1995.

When in autumn 1968 the first sister asked to join our community, br Enzo asked sr Minke for help by lending one of her sisters to Bose for a few months to accompany her. Sr Minke was impressed — she later confessed that she never forgot the audacity of that unknown young Italian, barely twenty-five years old. She asked to have one night to reflect and pray and in the morning unhesitatingly indicated one of her novices who had some knowledge of Italian learned in school. This generous act was a source of profound joy and created a tie between our communities that grew ever stronger through the years, becoming a true and faithful fraternal friendship, as sr Minke herself wrote us: “The communion that began then has never stopped growing deeper”.

Our gratitude goes to sr Minke and to her community for this journey together, for renewed encounters, for the grace of sharing.