Jesus, man for others 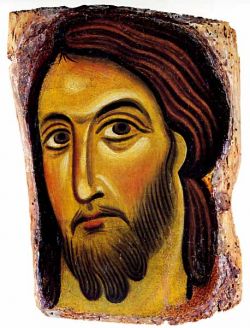 Bose, August 20-25, 2007
Week for young people
There is a man who knows how hard being and living are, but he can still wonder at the sight of such useless creatures as sparrows and

There is a man who walks, he passes among other men but his look is different. There is a man who lives among the other men, but his listening is different. Everybody sees the sun rising regardless of our miseries, but in that sun he contemplates the Father’s faithful love that allows us to start again. He is laughed at as a toper, a glutton, a publicans’ and prostitutes’ friend, but he doesn’t defend himself, on the contrary in those words he listens to something true about himself: he feels, in his own flesh, that the Father who is in heaven doesn’t draw back with horror before his human creature, that his love is stronger than our evil. There are people who divide men according to their wealth, power and social acknowledgement, but he goes directly to the door of men’s humanity, to their face, and he sees only two living creatures face to face and the word able to arouse the humanity inside the man, from the prostitute to the Pharisee, from the publican to John the Baptist’s disciple… He touches the sick, he strokes children, he let himself be touched by sufferers; he weeps, he gets angry, he falls exhausted, he rejoices… he is not afraid of exposing his vulnerable and defenceless body. Everybody thinks that one must eat the other men’s flesh to live, the poor’s flesh, but he will give his own flesh to eat, saying that he who wants to save his life must lose it for His sake. It is possible to meet him among the crowds, surrounded by a suffering mankind, and yet he does not fear silence and solitude, the desert and secluded places to be alone with the Father.

There is a man who knows how hard being and living are, but he can still wonder at the sight of such useless creatures as sparrows and such ephemeral as the flowers of the field. He speaks about common things, such as women who make bread, farmers who sow, fishers who cast the nets, women who clean their house, fathers and sons who quarrel, and yet his word is able to transform the simplest everyday realities, opening them to God’s mystery which makes itself present in our intricate and ambiguous stories… Everybody lives within closed boundaries, dividing the world between friends and enemies, communitarian and extracommunitarian people, defending one’s own turf. He is not afraid of crossing those boundaries because of his strong desire to meet others, he will cross also the last barrier, the mother of each exclusion and separation, i.e. the fear of death, and He will go towards death in love and freedom… There is a man who loves life and others so much that he is not afraid of going towards death, an infamous death… There is a man who is not colour-blind; he knows oppression and inequity and he doesn’t use roundabout expressions, he knows how to listen to the poor’s cry, the invisible men’s cry, and yet he doesn’t answer evil with evil, but he goes so far as to forgive those who kill him. This man knows the temptation of perverting God’s and man’s face, bending them to the interests of a clan, a group, an ethnic group, a country, a religion and to the idol of power, but he is able to remain faithful to the Father’s face and to the man’s flesh. There is a free man whose name is Jesus, the man who is proclaimed resurrected and at the right side of the Father by the Easter announcement; the man who teaches us to live in the today and to give our existence a human shape.

The opportunity to stop for a week and let ourselves be questioned listening to the story of this life, so that by following him we can give our existence a human shape. The opportunity to stop for a week and to try to learn to see with his look and to listen with his listening, so that a different “other” story can be possible not only for us but for each man. A week is short, it is nothing, it is only a little seed… and yet perhaps the opportunity to stop with other fellow travellers, listening to this man and questioning ourselves about our life is not little. It means the opportunity to have that room and that different time which make us see, think and act in a different way, against commonplaces, stereotypes, dazes, blindness opinions, and the bad silences that mark our everyday life. This is what we would like to be able to live on the days from August 20 to 25 here at Bose.

The brothers and sisters of the community of Bose