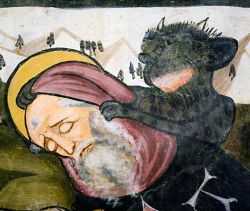 “Spiritual listlessness.” This is how the fourth-century Egyptian monk Evagrius Ponticus describes akedía, the spiritual malaise whose name has virtually no equivalent in a modern language and whose nuances include disgust with life, boredom, discouragement, laziness, sleepiness, melancholy, nausea, sadness, and lack of enthusiasm and motivation. John Cassian (fourth-fifth century) transliterated the Greek akedía into Latin as acedia, and about a century later St. Gregory the Great identified acedia with tristitia in his list of the capital sins. Akedia, which according to Evagrius afflicts anchorites in particular (those who live a monastic life that emphasizes solitude), has only been closely observed and analyzed in monastic environments, but it is “a phenomenon common to all humanity; in fact, it is the price of being human,” writes Father Gabriel Bunge, an eminent scholar of Evagrius. Akedia manifests itself as an instability that makes the subject incapable of maintaining a balanced relationship with space and time. Monastics who suffer from akedia find the effort of remaining in the solitude of their cell unbearable, are unable to inhabit their own body (habitare secum), and have the impression that time passes unbearably slowly.

Evagrius writes, “Akedia makes the sun appear to be slow-moving or even motionless, and the day seems to last fifty hours.” Akedia is a sort of asphixiation or suffocation of the spirit that condemns those who suffer from it to unhappiness by causing them to reject what they have or the situation (work-related, emotional, or social) in which they live, and to dream about another situation that is unattainable. Those who find themselves in this condition easily fall prey to various fears (for instance, the fear of illnesses more imaginary than real) and become inefficient in their work, intolerant, impatient with others (who often become the target of the affected person’s frustration and aggression), and incapable of controlling the thoughts that flood their minds and cast them into profound discouragement and dissatisfaction with themselves, causing them to wonder whether perhaps everything they have done in their lives was a mistake. Akedia can, in fact, become a depressive condition (the Catechism of the Catholic Church calls it “a form of depression due to the slackening of asceticism, lack of vigilance, and failure to guard the heart”) in which subjects are tempted to break with their past - for example, by abandoning their marriage or religious vows, or by making another ‘change’ - or even to consider suicide. Akedia, writes Isaac the Syrian, “gives a taste of hell.”
In early monastic descriptions, akedia is the “midday demon” that strikes most often during the hours when the desert heat is most oppressive (between 10:00 in the morning and 2:00 in the afternoon), before the single meal monks shared around 3:00 pm. In the writings of Pascal, Baudelaire, Kierkegaard, Guardini, Bergson and Jankélévitch, we find observations that are analogous, at least in part, to these early monastic descriptions of akedia, and others have noted similarities to forms of depression described in psychology.

It is especially interesting to consider the analogy that has been drawn between the phenomenon of akedia, which tends to strike at midday, and the midlife crisis, which usually strikes between the ages of thirty-five and forty. “There seems to be a biological basis behind the sense of apprehension, the tormented questions, and the lack of enthusiasm men and women experience in their late thirties. Could this be the state of mind medieval scholars called accidia, the capital sin of spiritual laziness? I think it is” (Richard Church). Those who undergo a midlife crisis and those who suffer from akedia experience many of the same reactions: denial, repression, self-deprecation, obsession with power, legalistic rigidity, depression, a tendency to eat and drink excessively, and numbness, among others.
How can we combat akedia? First, by accepting the limits that define human existence, namely, the passing of time and mortality (the monastic fathers recommended practicing memoria mortis), by taking responsibility for our past, and by accepting our own limitations and imperfections. Perseverance, patience (which is the art of living with what is incomplete), prayer, living a life in which relationships are central, involving one’s body in work that is physically demanding, and seeking help (the monastic fathers advised seeking a ‘spiritual father’ or guide) are other important elements of the struggle. Evagrius offers the following word of advice: “Set a measure for yourself in everything you do.” In other words, organize your time, set a schedule for yourself, and take responsibility for your life.