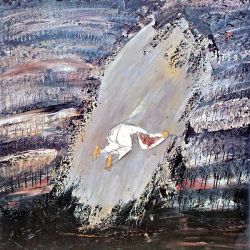 ...The experience at Gethsemani is significant...

Words of Spirituality
by ENZO BIANCHI
In our prayer of request we rise above our need and transfigure it in desire. We place a certain distance between ourselves and our situation

The form of prayer most frequently attested in Scripture, and taught by Jesus himself (cf. Matthew 7:7-11, 21:22), is the prayer of request. This is also the form of prayer that has caused more problems in the Christian tradition than any other. Christian writers have often spoken of the greater purity and perfection, and the overall superiority, of the prayer of praise and thanksgiving: "The principal form of prayer is thanksgiving," wrote Clement of Alexandria in the third century (Stromata 7, 79:2). Much closer to our era, and in the nineteen-sixties and seventies in particular, the prayer of request underwent a serious crisis. The process of secularization then underway, as well as the growing mastery, through science and technology, of areas that had long evaded human comprehension and had been delegated to the intervention of God, caused the prayer of request to be set aside as superfluous. Today we are observing its reemergence, often in forms that are not faithful to the Gospel and that reduce this prayer to a request for a 'magical' intervention, or, at times, to a demand addressed to a God who is seen as immediately 'available,' a God whose duty it is to satisfy every need. To begin, it should be said that from an anthropological point of view human beings do not simply make requests: the human being is a request, an appeal. This dimension of who we are always reveals itself in prayer, because in prayer, "whatever the specific circumstance happens to be, one's entire being is placed before God" (Heinrich Ott).

As we turn to God with our requests in the different situations of our life, we express our desire - without setting aside in the least our own responsibilities and commitments - to receive again and again our identity and the meaning of our life from God, in the context of our relationship with him. We confess that our life does not ‘belong’ to us and is not simply our own. In this sense the prayer of request is unquestionably scandalous - it is an affront to our pretenses of self-sufficiency. Further, behind every authentically Christian prayer of request there is a radical request for meaning. This is a search that technological progress will never be able to make outdated, and it directly concerns not only the believer ("Who am I?") but also the God in whom "we live and move and have our being" (Acts 17:28). In our prayer of request we rise above our need and transfigure it in desire. We place a certain distance between ourselves and our situation, establish a period of waiting between our need and its satisfaction, and try to make space for an Other within the enigmatic situation in which we are living. This makes the prayer of request eminently contemplative: it is the believer's way of affirming that God is truly Lord of the world and of all creation. A believer who asks something of God is more interested in God's presence than in obtaining a particular benefit. The prayer of request is comprehensible and possible only in the context of a relationship in which we address God as his sons and daughters (Matthew 7:7-11), and such a relationship is only possible in faith (Romans 8:14-17).

It is within this relationship and this faith, and within the limits of both, that the Christian prayer of request finds its meaning. It should by no means be confused with forms of the prayer of request found in other religions, but finds its norma normans in the order of the requests made in the Our Father, where everything is centered around the request ‘Your kingdom come.’ Our criterion for measuring the authenticity of our prayer is the prayer of request the Son Jesus Christ addresses to his Father. Jesus' faith and his filial relationship with God, his way of addressing his Father, are offered as a model for the believer's prayer of request. The experience at Gethsemani is significant: Jesus confesses God as "Abba, Father" (Mark 14:36), and in the intimacy of his relationship with God asks that "the hour" (Mark 14:35) and "this cup" (Matthew 26:39) pass by him, but he subordinates his request to "not what I will but what you will" (Mark 14:36); "not as I will, but as you will" (Matthew 26:39). There is therefore a content (what) and a form (as) that are summarized in the cross and represent the limit we encounter in the Christian prayer of request. This is a prayer that can take the form of a struggle between the believer and his or her God, a confrontation and interaction between two freedoms. It is important to safeguard the freedom of the one who prays, and thus his or her freedom in asking; God's freedom, and thus his freedom in answering; the autonomy of natural laws and the other realities of the physical world; and the reality of God's spiritual presence in the world. From a Christian perspective, the prayer of request is not a magical means of resolving the enigmas of human existence or avoiding what is negative in life. In our relationship with God there is a dimension of enigma that cannot be removed ("My God, my God, why have you forsaken me?" Mark 15:34), but that can transform itself into mystery during prayer.

The Bible suggests an approach to the prayer of request in which we begin by recognizing that "we do not know how to pray" (Romans 8:26). In each person's experience of prayer there is an apprenticeship: as the years pass we learn how to ask, we grow in our relationship with the Lord, and we learn to make our requests "in the name of the Lord" (John 14:13-14) and not in our own name. In other words, we learn to exercise discernment with regard to our needs, to know the Lord, and to remember the need for constant conversion to the will of God expressed in his Word. We do not reach our aim in the prayer of request when God does our will, but when we do his will (Matthew 6:10)! Our prayer requires faith: "Whatever you ask in prayer, believe that you have received it, and it will be yours" (Mark 11:24). The gift is given before we ask for it; God's response comes before our request! What God has already given us is the gift of his Son Jesus Christ! Dietrich Bonhoeffer writes, "Everything we should ask of God and hope to receive from him is in Jesus Christ. We should try to enter into Jesus’ life, words, actions, suffering, and death, so that we can recognize what God has promised and what he always does for us. God does not give us everything we desire, but he keeps his promises. He is still the Lord of the earth who protects his church, continues to renew our strength, and does not impose burdens on us beyond what we can bear, but fills us with his presence and strength." Here we see clearly the importance of the prayer of request, and at the same time, the need for our prayer to be constantly purified and made more faithful to the Gospel.