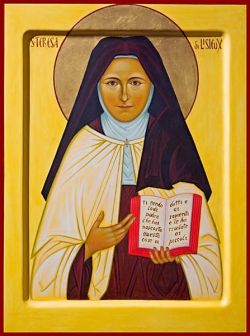 THE ICONS OF BOSE, Theresa of Lisieux

In 1897, the Carmelite nun Theresa of the Child Jesus died in Lisieux, France.
Thérèse Martin was born in Alençon in 1873. She lost her mother at the age of four and spent the rest of her life in deeply religious environments, as can be seen from the apparently devotional tone of her writings, especially in the retouched versions that circulated after her death.
Theresa understood her calling to religious life at a young age, and took a first step towards answering her vocation by entering the Carmelite monastery of Lisieux in 1888, at the age of only fifteen. But it was after her monastic profession that her unique mission in the church began to take on its defining characteristics.
In 1895 Theresa offered herself as "a sacrificial victim of God's merciful love." She had understood that the act of giving one's life has saving value for oneself and others only if it is motivated by love. "I have finally found my vocation: in the heart of the church, my mother, I will be love, and in this way I will be everything." Having become, in her own words, "a martyr of love," Theresa remained faithful to her promise to love until her death, which came when she was only twenty-four.
Her life was filled with trials - the dramatic loss of her father, the pulmonary illness that claimed her own life in just over twelve months' time, and above her experience of "dark nothingness," when even the certainty of faith left her. What remained was love, strengthened by Theresa's constant search for the Beloved and expressed as daily faithfulness to her sisters in the monastery, where she had become director of novices. Even when the voice of the Beloved seemed lost in silence, Theresa's love did not fail.
The teaching she left with her life on the absolute primacy of love, even in the darkness of doubt that clouds the believer's heart, earned her the title of Doctor of the Church.

O God,
who open your kingdom
to the small and the humble,
grant that we may walk
in the footsteps of Theresa of Lisieux,
making our life
a journey of love towards your face.
Through Christ our only Lord.

Today West Syrian Christians commemorate Addai, an apostle of the East, whose memorial is celebrated by the Chaldean church on the fifth Sunday of Easter.
Historical information about his life is very scarce. A native of Palestine, Addai was, according to tradition, the first of the seventy disciples of whom Luke's Gospel speaks. He founded the church of Edessa between the first and second centuries, and one of his disciples, Mari, founded the church of Persia.
The two apostles of the East, Addai and Mari, are commemorated together in many parts of the Eastern Christian world. The date varies from region to region, but the most important feast is perhaps that which is celebrated with an elaborate liturgy in Iraq and Kurdistan on August 5.

Today the Orthodox churches commemorate Romanus the Melodist, a deacon and hymnographer who perfected the musical genre of the kontakion The first letters of each verse of a kontakion form an acrostic, and each verse ends with an unchanging refrain.
Romanus was born in Emesa, Syria in the second half of the fifth century. Very little is known about his life. He was ordained a deacon and served first at the Church of the Resurrection in what is now the city of Beirut, and later in Constantinople, where he settled during the reign of the emperor Athanasius I (491-518).
In the capital of the Byzantine empire, Romanus carried out his ministry at the Church of the Mother of God in what was known as Cirus' quarter. His discovery of Byzantine culture led him to refine his poetic art, and he became known as one of the greatest poets of Byzantium. He revealed all of the expressive possibilities of the hymnic genre of his time, drawing inspiration for his own hymns from the Hebrew and Christian Scriptures, apocryphal writings, and the lives of the martyrs and saints. In his lyrics there is a striking union of the sublimity of adoration with the immediacy of images.
Romanus, called "the Melodist," is said to have composed more than a thousand kontakia for feasts in the Lord's honor and in memory of the Church's saints.
He died around the year 556. In classical iconography he is portrayed asleep dressed as a deacon, and in a dream the Virgin hands him a scroll of paper to eat, which hagiographers say was the source of his poetic inspiration.

ORTHODOX CHRISTIANS AND GREEK CATHOLICS:
Protection of the Mother of God
Hanania, apostle, one of the 72
Romanus the Melodist, hymn writer
Bidzina, Scialva and Elisbar (17th cent.), martyrs (Georgian Church)