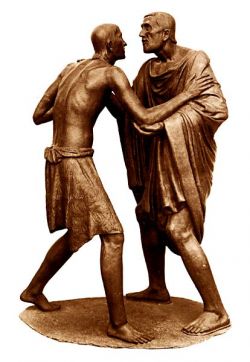 Words of Spirituality
by ENZO BIANCHI
Only women and men changed by the Gospel, who demonstrate their conversion to others through the way they live

A call for conversion is at the heart of the two different versions of the exclamation that marks the beginning of Jesus' preaching ministry. Following in the footsteps of Hosea, Jeremiah and all the prophets up to John the Baptist who called for a return to the Lord (cf. Matthew 3:2), Jesus asks for conversion, or return (teshuvah in Hebrew) to the one true God. Conversion is also the theme of the early church’s preaching and the preaching of the apostles (cf. Acts 2:38, 3:19), and it is the church’s essential message and responsibility in every age. The root of the Hebrew verb shuv, ‘to return,’ can also mean ‘to answer,’ which tells us that conversion, the act of returning again and again to the Lord, is the responsibility of the entire church and of each individual Christian. Conversion is not an ethical demand, and although it does imply distancing oneself from idols and sin (cf. 1 Thessalonians 1:9, 1 John 5:21), its motivation and foundation is eschatological and Christological. It is in relation to the Gospel of Jesus Christ and the kingdom of God, close at hand in Christ, that the reality of conversion takes on its full meaning. Only a church in which faith is central can understand conversion as a dimension of daily life, and it is only when the church makes conversion a reality in its own life that it can claim the role of credible witness to the Gospel in history and among humanity, and thus evangelize.

Only women and men changed by the Gospel, who demonstrate their conversion to others through the way they live, are able to request conversion of others. Without personal conversion, we do not announce salvation and are completely incapable of asking others to make a change. Christians whose lives remain focused on worldly concerns can do no more than encourage others to remain as they are: by preventing others from seeing the effectiveness of salvation, they impede evangelization and weaken the Gospel’s force. In one of John Chrysostom’s homilies, we read, “You can’t preach? You can’t spread the word of doctrine? In that case, teach with your actions and your behavior, O newly baptized. When those who saw you immodest or sinful, corrupt or indifferent, see you changed and converted, you can be sure they will say, as the Jews said to the man blind from birth who was healed, ‘Is it him?’ ‘It is!’ ‘No, he looks just like him.’ ‘Isn’t it him?’” We can say, in summary, that conversion is not only the initial moment of faith in which we arrive at belief in God by leaving behind a previous situation; it is the form faith takes in our lives. A problem arises here for most Christians: those whose familial environment is Christian and who are baptized at birth, receive religious instruction, and are introduced to ecclesial life as part of their upbringing do not normally experience a change between a before and an after, between a non-Christian situation and the journey toward faith that characterizes the Christian ‘convert.’

On the other hand, we are once again seeing today people who return to Christian life after many years spent ‘in exile’ from faith, or who call themselves converted because they have met Christ in an unexpected way - or perhaps because they have reached, over time, the point of making a full commitment to Christianity. The phenomenon of conversion is thus reappearing, even in countries where Christianity has been present for centuries. This can help all Christians understand that conversion truly is essential, and that Christian life itself can only be understood in terms of continually renewed conversion. Conversion attests that Christianity is perennially young: a Christian is one who continues to say, “Today I am beginning again.” Its source is faith in the resurrection of Christ. No fall, no sin has the last word in Christian life, and our faith in the resurrection makes us able to believe more strongly in God’s mercy than in the evidence of our own weakness, and to set out again on the path of faith, following Christ. Gregory of Nyssa writes that in Christian life we go forward “from beginning to beginning, across beginnings that never end.” Yes, conversion is always essential for the church and for each Christian, because we are always called to recognize the idols that appear in our midst and to renew our struggle against them, in order to show that it is God who is Lord of our lives and of reality. When the entire church makes conversion a part of its life, it recognizes as it does so that God is the Lord, not the church’s possession. Conversion implies an expression in the church’s life of the eschatological dimension of faith - in other words, the expectation of the coming kingdom of God that the church does not possess but announces, through the testimony of its own conversion.