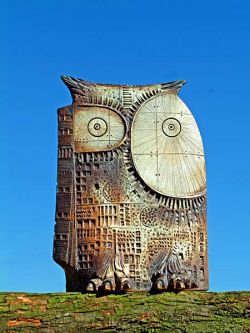 Words of Spirituality
by ENZO BIANCHI
The price of vigilance is this struggle against ourselves, and those who are vigilant are also resistent...

“All we need is a vigilant spirit.” This apophthegma of Abba Poemen, a desert father, is a strong statement of the centrality of vigilance in Christian spiritual life. In what does it consist? In the New Testament, vigilance is contrasted with drunkenness or drowsiness and defined as the sobriety of those who have a clearly-defined goal to pursue and who ‘keep their eyes open,’ knowing that if they are not vigilant they may be distracted from their goal. And since the goal to be pursued, for a Christian, is a relationship with God in Jesus Christ, Christian vigilance is completely oriented toward the person of Christ, who has come and who will come again. Basil of Cesarea writes, in the conclusion of his Moral Rules, that the Christian’s specific identity consists in this vigilance directed toward Christ: “What is it that defines the Christian? Keeping watch every day and hour and being ready to carry out perfectly what pleases God, in the knowledge that the Lord will come at an hour we do not expect.” Basil’s emphasis on the temporal dimension of vigilance is significant. A type of the vigilant man or woman is the prophet, who translates the gaze and the Word of God into the ‘today’ of time and history. Vigilance is inner lucidity, intelligence, the ability to think critically, awareness of and involvment in the world in which one lives, and freedom from distraction and dissipation. The vigilant person, who has achieved unification by listening to the Word of God and remaining inwardly attentive to the demands of the Word, becomes responsible - in other words, radically not indifferent, aware of the need to pay attention to his or her surroundings, and in particular, capable of watching over others and taking care of them.

“Being an episcopus (bishop),” writes Martin Luther, “means looking, being vigilant, keeping careful watch.” Vigilance is a quality that demands a great deal of inner strength and, in turn, produces equilibrium: we are asked to be watchful not only with regard to history, the world in which we live, and those around us, but also with regard to ourselves, our own ministry, our work, our personal conduct, and the entire sphere of our relationships. Our vigilance allows Christ to reign as Lord in every aspect of our lives. This is exactly why vigilance is so difficult: we are asked, first and foremost, to be watchful with regard to ourselves. The Christian’s enemy is within, and not outside, him or her. “Beware that your hearts do not become drowsy from carousing and drunkenness and the anxieties of daily life (...) be vigilant at all times and pray,” Jesus says in the Gospel of Luke (21:34-36). The price of vigilance is this struggle against ourselves, and those who are vigilant are also resistent. Watchfulness means fighting to defend our inner life, to avoid being distracted by worldly seductions or overcome by life’s anxieties, to create unity between our faith and our life, and to maintain balance and harmony in our life. Being vigilant also means adhering to reality instead of using one’s imagination as an escape or seeking refuge in idolatry. It means working and avoiding laziness, interacting with others, loving and refusing indifference, and fulfilling one’s personal and social commitments in expectation of the coming kingdom of God. The quality of our life and our relationships depends on our vigilance, which leads us toward fullness of life and helps us fight against the allure of death.

Paul tells the Christians of Thessalonica, “Let us not sleep as the rest do, but let us stay alert and sober,” (1 Thessalonians 5:6). According to Biblical symbolism, and in other cultures as well (in Greek mythology, for instance, Hypnos, Sleep, and Thanatos, Death, are twins) falling asleep means entering the realm of death. Vigilance, on the other hand, is an attitude that characterizes anyone who is attentive and responsible, but it acquires particular significance for the Christian who places his or her faith in Christ, who died and is risen. At the heart of the Christian’s vigilance is his or her profound and intimate certainty of the victory of life over death. Those who are vigilant - as opposed to those who are asleep or numb, who dull their inner senses, and who remain on the surface of events and relationships - become fully alert, and they also become men and women of light who are capable of radiating the light that is in them. Christians, ‘illuminated’ through their baptismal immersion, are ‘children of light’ and are called to let their light illuminate others: “Your light must shine before others, so that they may see your good deeds and glorify your heavenly Father” (Matthew 5:16). This outpouring of light has nothing to do with spiritual exhibitionism: it happens of its own accord when the light that dwells in a vigilant heart, which cannot remain hidden, overflows and streams forth. In a certain sense, vigilance is the only thing that is absolutely essential in Christian life: it is the source of every virtue, the salt that flavors all of our actions, and the light by which we think and speak. Without vigilance, we run the risk of seeing all of our activity come to nothing. Abba Arsenius said, “Everyone must be watchful of his actions, lest he labor in vain.”